More than two decades and nine cited publications of scientific research by HPU Associate Professor Brenden Holland, Ph.D., are featured in a new book entitled A World in a Shell: Snail Stories for a Time of Extinctions by Thom van Dooren. The book details the remarkable and fascinating natural history, cultural importance, and dedicated research efforts by biologists to better understand and control threats to these vulnerable and diverse Hawaiian lineages. Van Dooren provides an eloquent and intimate collection of “snail stories” in Hawai’i, once the home to over 750 species of endemic land snails, and at least two-thirds of which are now extinct.

In the opening chapter of the book, “The Wanderers,” the author details Holland’s 2018 publication that documents a series of experiments showing trail-following behavior, providing the first evidence of chemical communication among adults of tree snail species in the endangered genus Achatinella (p.36).  The experiments were conducted and published with Canadian summer intern Marianne Gousy-Leblanc and UH Manoa Biologist Joanne Yew. 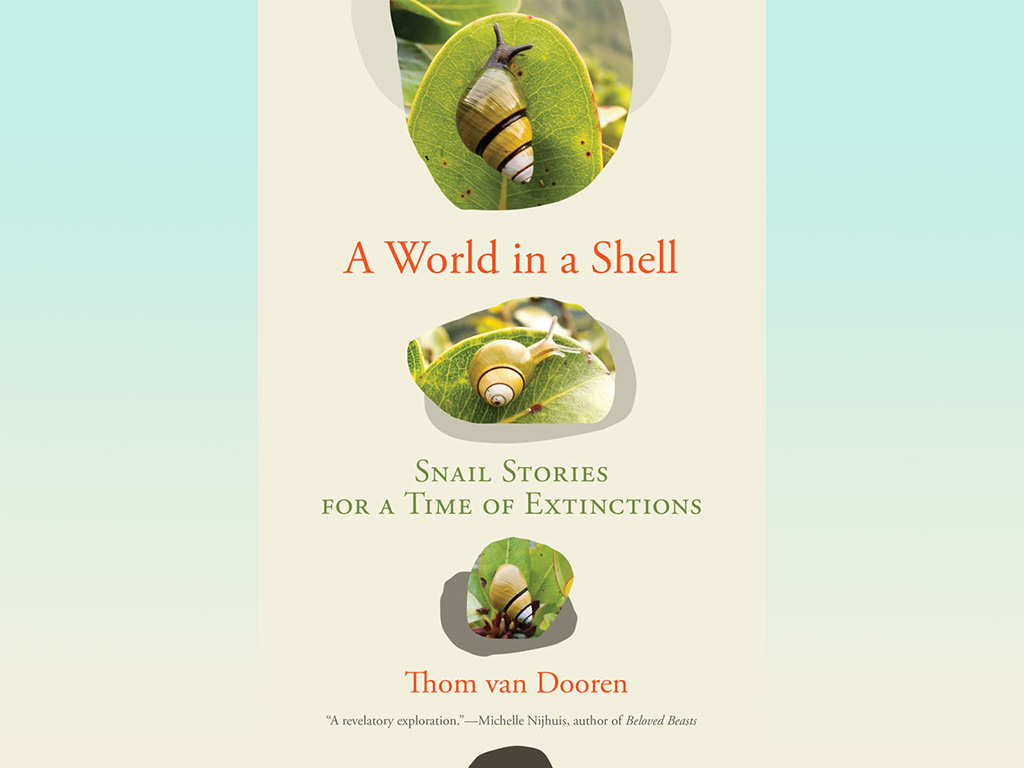 In the succeeding chapter, “The Drifters: The Mysterious Deep Time Movements of Snails,” Holland and Van Dooren hike to the top of a scenic cliff edge of Tantalus Mountain, on the Kalawahine Trail, making their way along the rugged, breathtaking spine of the Ko’olau Range that runs the length of eastern O’ahu.

Van Dooren writes, “Brenden had offered to take me up to this spot to see some snails living in a pretty unexpected environment. It was a perfect day for the trip. It had rained earlier that morning, and was still drizzling on and off: ideal weather for daytime snail spotting” (p. 51).

The land has been cultivated for crops, and as a result numerous other species have arrived and the forest of Mount Tantalus is dominated by a mélange of crops gone wild. Everything from Indonesian cinnamon, coffee, guava, avocado, and occasional mango tree. Two plants now dominate the path: ginger and night-blooming jasmine.

Holland took Van Dooren on this hike to observe a population of rare tree snails called Auriculella diaphana, where they occur along a section of the trail in introduced ginger and night-blooming jasmine. This endemic O’ahu snail is no bigger than a pencil eraser and its shell the color of caramel with swirls that resemble a cinnamon roll.

It’s a bit of a conundrum why this species persists in this section of the forest for several reasons. This relatively low elevation habitat is dominated by nonnative plants, and is home to invasive snail predators like rats, Jackson’s chameleons, and wolfsnails, yet this snail survives against all odds. Holland notes that Auriculella diaphana was once found across an area that spans 36 kilometers, and that today, it’s found in a single patch of forest covering about 2,000 square meters. In other words, Holland says, “the snail has been eliminated from more than 99.9% of its former range. I have a hard time calling them common. One forest fire and the species could be extinct” (p.52).

Why they persist in this remote spot, in nonnative host plants and nowhere else, is a mystery even to experts like Holland. These observations led to a series of lab experiments where Holland and his research group raised 100 snails in captivity, in native host plants (in the same nonnative plants that harbor this species at Tantalus) and showed that the snail colonies in native plants reproduced at more than 20-fold higher rates than did the colony kept in nonnative host plants. This clearly showed that it would be far healthier and more advantageous to this species to be provided with native host plants. Due to this research, the Department of Land and Natural Resources rounded up as many of these snails as they could and moved them into a nearby fenced area with predominantly native host plants that Holland’s work demonstrated enhances reproduction.

Throughout the book stories of Hawaiian snails, and the research that has helped us to understand their ecology, are charmingly told, detailing and elucidating clues to the natural history of Hawaiian snails that are termed the “jewels of the forest” for their colorful and highly varied shell banding patterns. The book also covers varied topics of Holland’s research, ranging from DNA studies showing the dietary preferences of rare Hawaiian tree snails, the causes underlying their vulnerability and the myriad biological factors that threaten their existence, the ecological services provided by snails, how best to improve their conservation status, and how their ancestors most likely arrived in Hawai’i millions of years ago.

Van Dooren concludes the book on a note of hope. Hope that one day many of the remaining species of Hawaiian snails may recover and thrive. Hope that predators like the chameleon and wolfsnail can be controlled and ultimately removed from the ecological equation, and “advancements in predator control might improve the situation.” Hope that new technology such as “pheromone-based bait might be developed that would allow more effective and targeted approach to the eradication of wolfsnails, or at least make it possible to remove and control the species within some large sections of that forest in an ongoing way” (p. 187).

A World in a Shell: Stories for a Time of Extinctions is a wonderfully captivating book on these unique native lineages and the aspiration that they will flourish once again.

Photos courtesy of Brenden Holland and the MIT Press