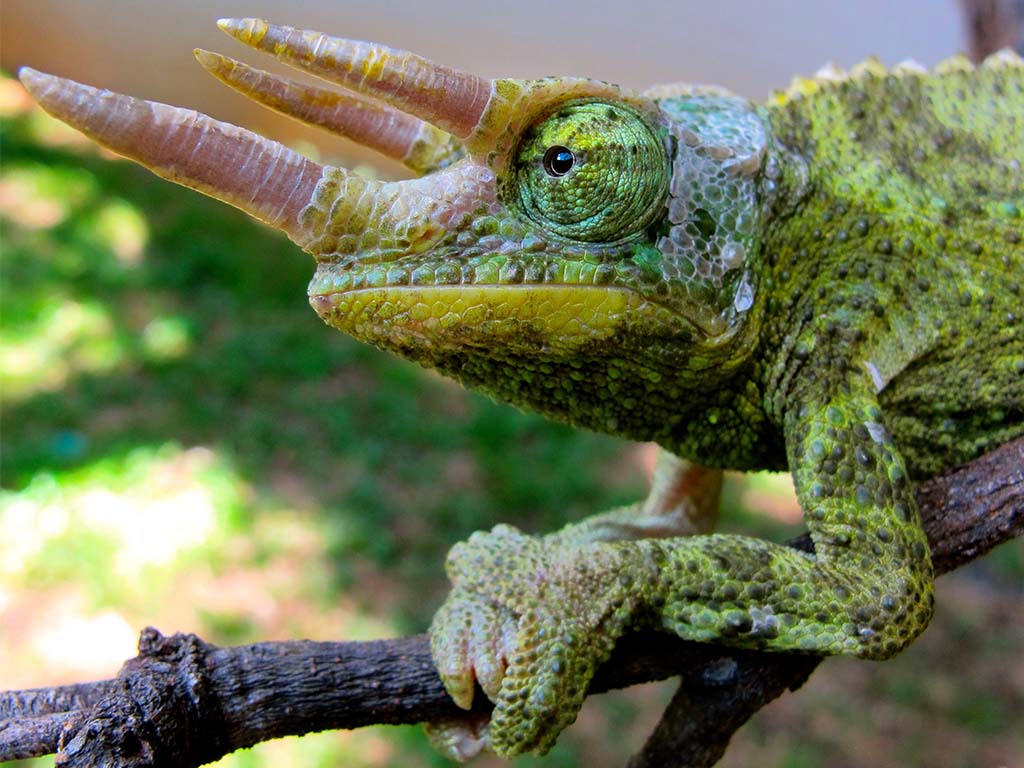 HPU Associate Professor Brenden Holland co-authored a paper with scientists at Macquarie University, the University of the Witwatersrand in South Africa, the Australian National University, and the University of Melbourne in Australia. The scientists found the first evidence of an animal with dynamic color change developing brighter signals due to relaxation of the forces of natural selection. The paper appears in the May issue of the journal  Science Advances  and describes the results of paired behavioral trials conducted in their native range in Kenya, and repeated in Honolulu, literally, in Holland’s backyard.

The researchers first tested whether chameleons in Hawai‘i (where they were accidentally released via the pet trade in the 1970s) would recognize and react to realistic scale models of the two main African predators: a hawk and a tree snake. They then repeated the same experiments in Kenya, and remarkably, both groups of chameleons exhibited the same behavior, suggesting that recognition and reaction to these predators is biologically hardwired, even though chameleons in Hawai‘i had never been exposed to either of these predators since their release over 50 generations ago.

Chameleons are well known for their ability to change their skin color, and one function of this trait in males is to attract females during courtship. Here, the authors measured skin brightness relative to the forest background and found that the Hawai‘i chameleons were about 30% brighter than those in Kenya.

Holland explains that the mechanism behind the difference is likely natural selection.

“Natural selection often operates as a tradeoff,” says Holland, “or balance between ability to reproduce, i.e., pass along one’s genes, and survival; in this case, avoiding predators. A trait like color-change brightness in the presence of visual predators (in Africa) is highly constrained, where if too bright they are picked off by visual predators, but if not bright enough. The males cannot attract females and fail to reproduce. But Hawai‘i lacks these visual predators, and therefore chameleons are freer to become brighter over the generations.”

According to Holland another important take-home message is that “traditionally, it has been assumed that evolutionary change takes thousands or millions of years, but this study shows that evolution can occur over much shorter time periods, even decades.”

Another  study by Holland and his research group focused on Hawai‘i chameleons, showing that populations on the Big Island of Hawai‘i have evolved larger heads, likely due to environmental conditions, namely drier habitat and harder prey, such as beetles, requiring stronger bite force.

In 2021, Holland and a team of researchers from Japan, Canada, and HPU discovered a new species of jellyfish called  Tima nigroannulata. The jellyfish is the size of your hand, has a black ring around the bell and over 50 tentacles.