FORECASTING THE FUTURE OF CORAL REEFS

A LIFE DEDICATED TO ENDING HUNGER IN AMERICA 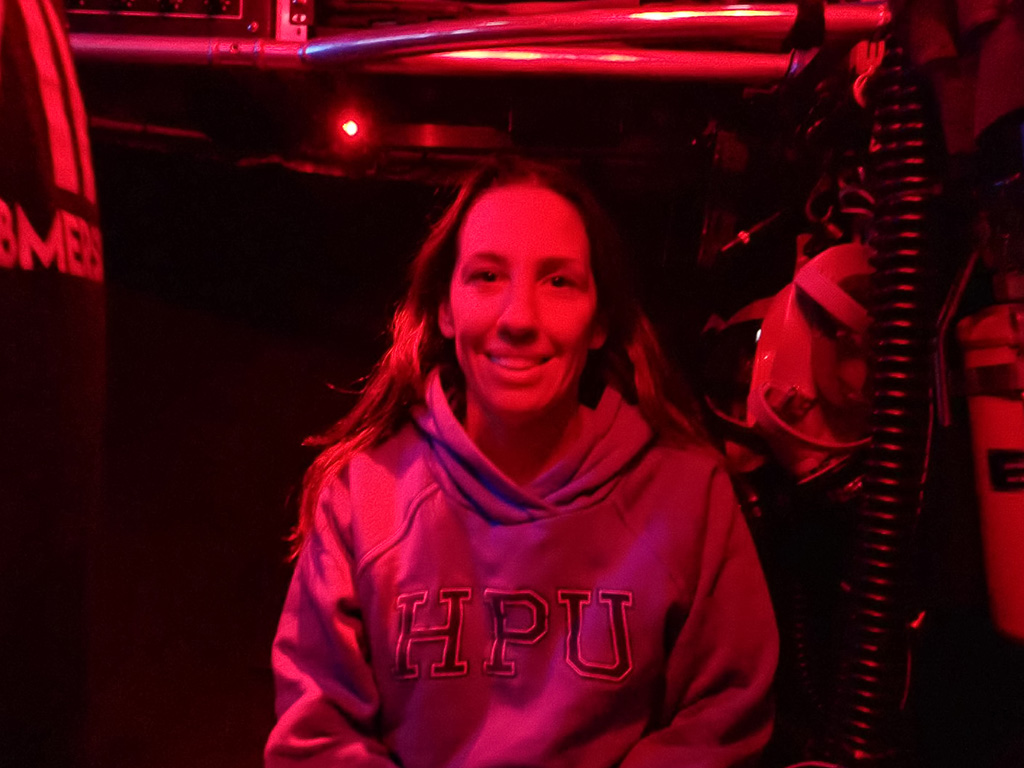 Olivia Nigro aboard Alvin while diving to the seafloor of the Mid-Cayman Rise.

HPU Assistant Professor of Biology Olivia Nigro, Ph.D., was among a team of 20 U.S. scientists who were selected to participate in a three-week research expedition that recently took place aboard the R/V Atlantis. The goal of the scientific verification expedition (SVE) was to test the scientific capabilities of the famed Alvin deep submergence vehicle. The submersible was recently Navy-certified to increase its maximum dive depth from 4,500 to 6,500 meters. This overhaul, which took over two years to complete in Alvin’s home port of Woods Hole, Massachusetts, allows the human-occupied, three-person vehicle to increase its exploration capabilities.

“Being a part of this expedition was a dream come true for any marine scientist,” said Nigro. “Alvin has a rich history in the oceanographic community. The submersible has allowed hundreds of scientists to experience the deep ocean firsthand.”

In a statement released by Woods Hole Oceanographic Institution (WHOI), the Alvin is described as the world’s most productive submarine that can travel to roughly 99% of the global seafloor in search of new discoveries that include volcanic processes and mineral resources. This new capability will give the science community an unprecedented opportunity to visit a critically under-studied part of the planet. Alvin has been in operation since the 1960’s and is credited with discovering hydrothermal vents, finding the remains of the Titanic wreckage, and being featured in over 2,000 scientific publications.

The expedition began on July 26 in San Juan, Puerto Rico, and included 14 Alvin dives in the Puerto Rico Trench and the Mid-Cayman Rise while travelling 2,780 nautical miles to its return port in Tampa, Florida on August 17. WHOI highlighted these historic dives that included reaching a maximum depth of 6,322 meters, visiting the deepest known ultra-high temperature hydrothermal vents, and allowing eleven scientists to achieve their first dive aboard Alvin. 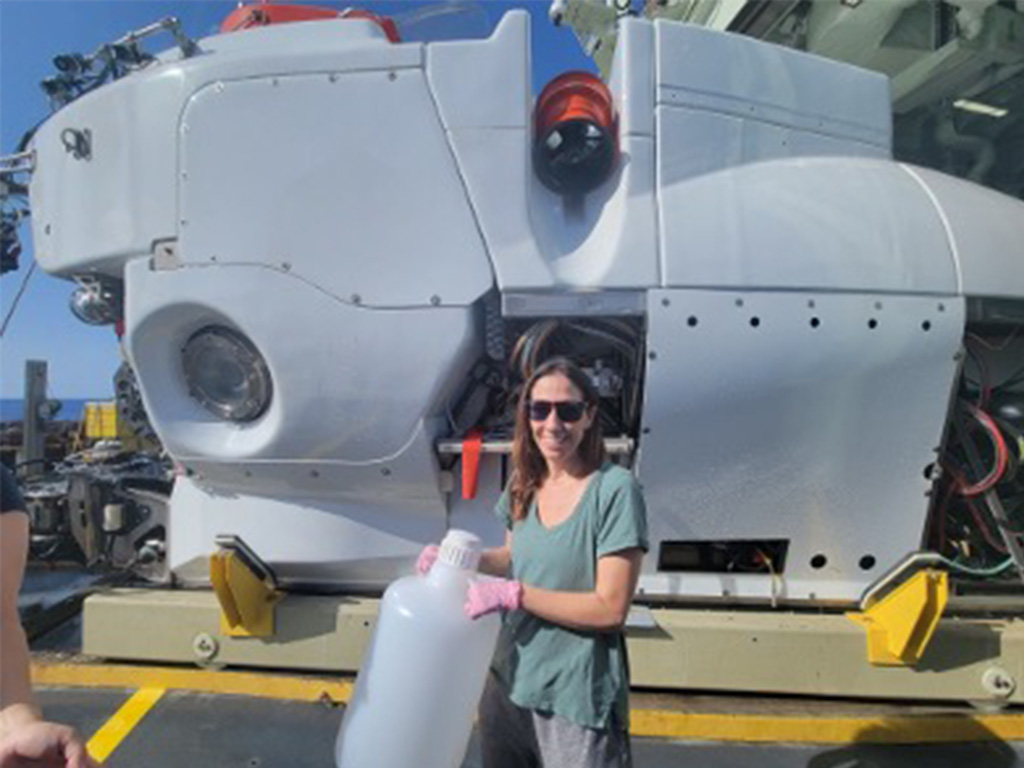 Olivia Nigro standing in front of the Alvin submarine, aboard the R/V Atlantis.

Nigro was one of the scientists who made the long trek to the deep-sea floor, spending about eight hours in the submarine during her dive where she was accompanied by one additional scientist and the Alvin’s pilot. Nigro and the team of scientists were able to make direct observations while on the submarine.

The primary goal of the cruise was to verify that the systems of the submarine had endured the upgrade process and were functioning at peak capabilities. However, the scientists were also able to collect samples that supported each of their research goals. This included samples of exposed oceanic crust and seafloor organisms, some the deepest known examples of their species.

Nigro’s research focuses on the smallest biological entities in these deep-sea environments, the bacteria and viruses. She was able to use sampling equipment that she modified to interface with Alvin’s upgrades to collect hydrothermal vent fluids and pieces of massive chimneys, which contain millions of microbes.

“Similar to larger organisms, there is quite a lot that we do not know about the microbes living in these hydrothermal systems,” said Nigro. “This oftentimes includes some of the most fundamental facts, such as how microbes are able to obtain energy, grow, and tolerate the extreme conditions we observe at these vents. Gaining a better picture of these processes allows us to more clearly understand the limits on where we can expect to find life.” 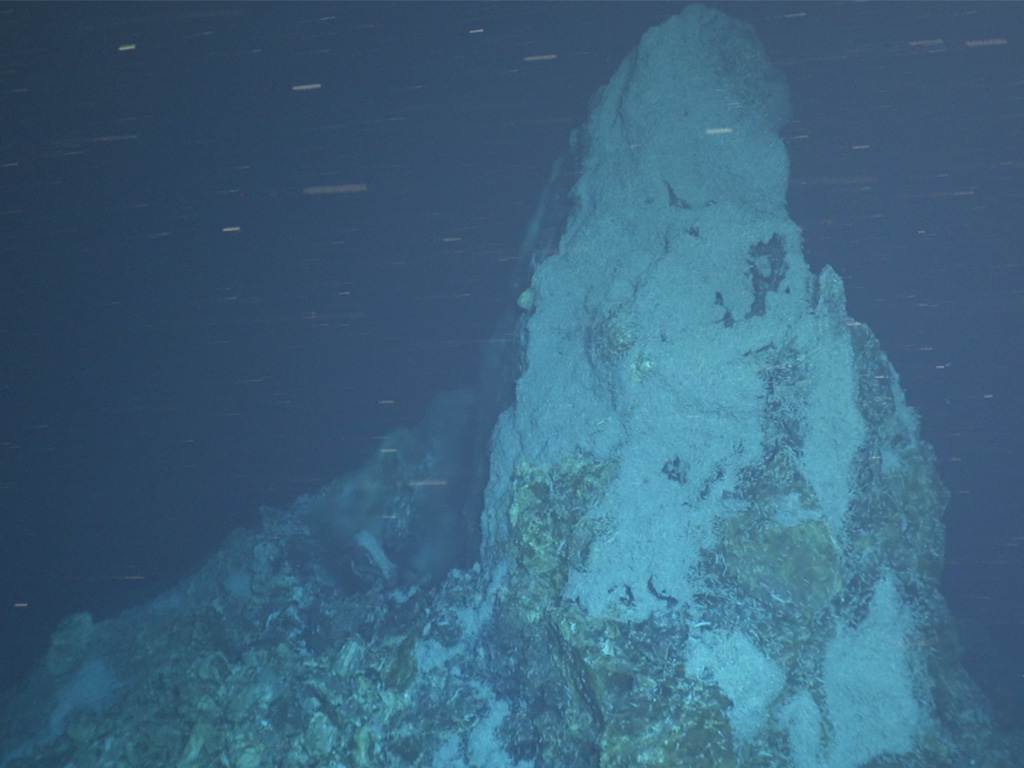 WHOI reported that upgrades to the Alvin submarine were funded by the National Science Foundation (NSF) and include new titanium ballast spheres, an upgraded hydraulic system, new thrusters and motor controllers, updated command-and-control systems, and a new 4K imaging system. These features will allow for a new wave of deep-sea exploration.

“Alvin is built and maintained to enable new discoveries and provide new insight into the way our planet works,” said WHOI Associate Scientist Anna Michel in a statement. Michel is chief scientist of the National Deep Submergence Facility that operates Alvin. “Every generation of scientist presents new questions and Alvin has responded in ways that have rewritten textbooks. There’s a new generation waiting to use the sub and to them we say, 'Alvin is ready, where do you want to go?'"