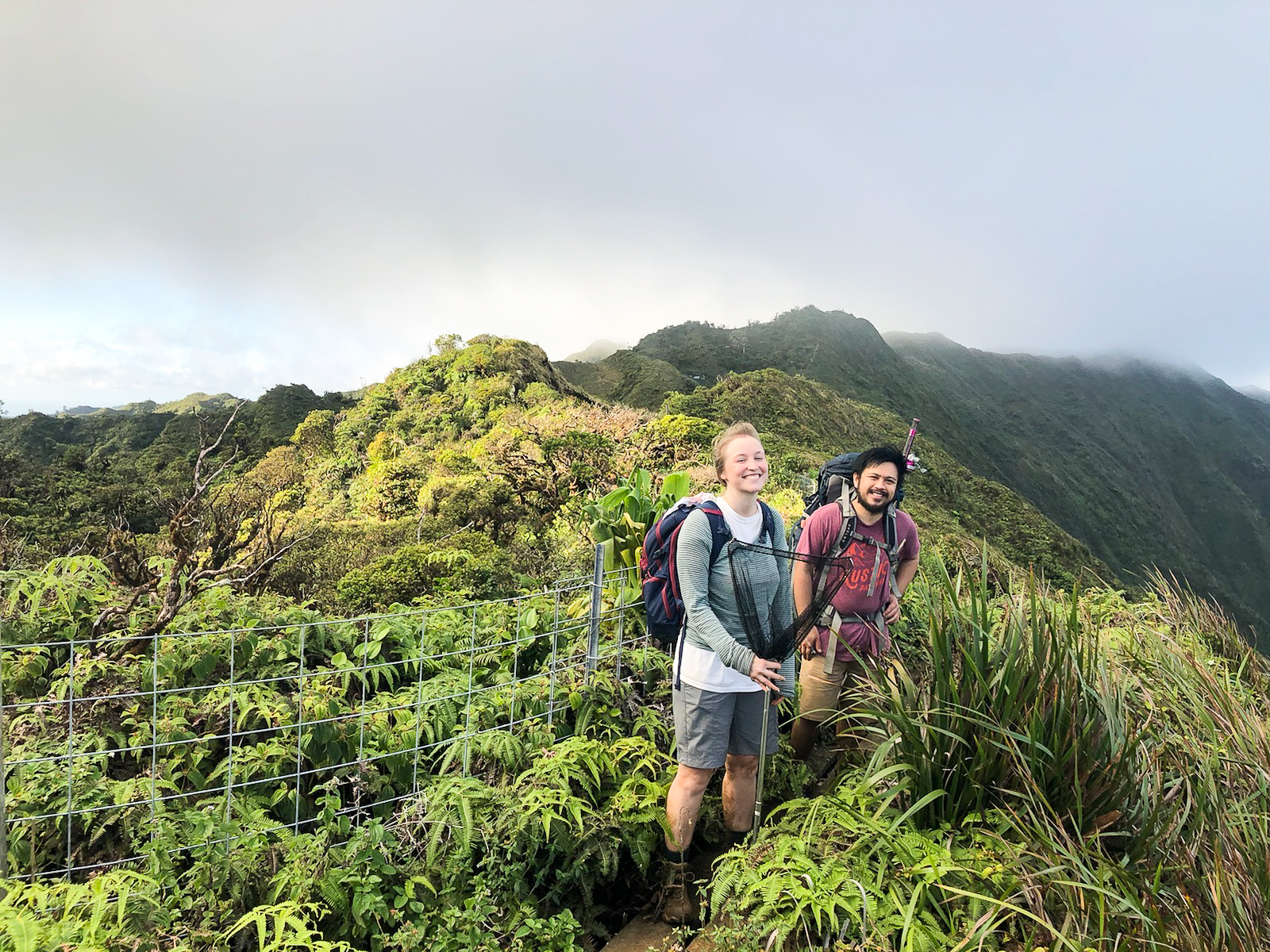 HPU Master of Marine Science student Heidi Beswick Cutia is researching the invasion ecology of the bullfrog in Hawaiʻi. The bullfrog (Rana catesbeiana) was first introduced to the Hawaiian Islands over a hundred years ago and has long been considered an invasive species. Today, they are found on all main islands in Hawaiʻi, and the International Union for Conservation of Nature has placed the bullfrog as one of the worst invasive species in the world. 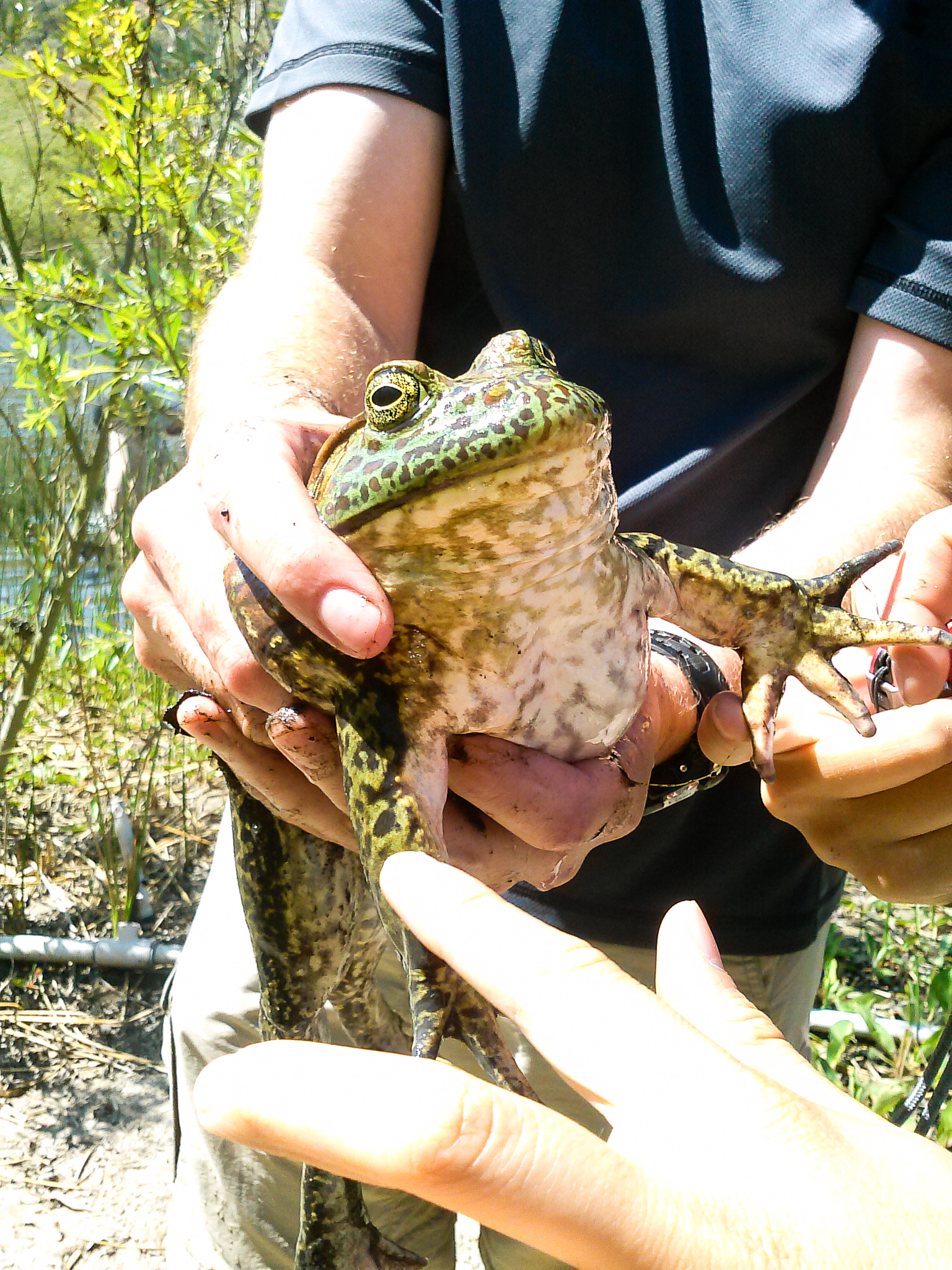 “The bullfrog is a voracious predator, eating Hawaiian stilt chicks, amphibians, and endemic Hawaiian aquatic animals,” said Cutia. “They can grow to be around eight inches long. It was first brought to Hawaiʻi as a food source for their long legs.”

Bullfrogs have mostly been ignored in Hawaiʻi for over 100 years; but for the last two years, Cutia has been researching the bullfrog at HPU’s Makapuʻu campus, learning a great deal about its morphology, genetics, and predatory behavior.

“The bullfrogs have the potential to interact with native species,” said Cutia. “They are located in low-elevation wetlands, which is where endangered birds are located and prefer to nest. They are also known to spread chytrid, a fungus that affects frogs and amphibians. They are one of two aquatic invasive species that can get into pristine habitats in Hawaiʻi.”

The U.S. Fish and Wildlife Service produced a technical report in 2004 on bullfrogs at the James Campbell Wildlife Refuge. Tracking collars were placed on endangered Hawaiian stilt chicks, and unexpectedly, 50% of the stilt chick mortality rate was caused by bullfrogs eating the chicks. Frogs and stilt birds need to be near water and are often found at Kualoa Ranch and Kawai Nui Marsh.

Cutia has collected data on roughly 200 frogs in over two years, building a genetic tree of the bullfrog, comparing genetic samples and morphology differences between frogs in Hawaiʻi and on the mainland. She is also conducting dissections of bullfrogs to see what they eat.

“Do bullfrogs have weaker genetic diversity in Hawaiʻi?” asked Cutia. “Do they have high fitness and predatory success despite low diversity? These are some of the questions I seek to answer in my thesis set to be completed May 2022.”

To catch a bullfrog Cutia must search for them at night because they are camouflaged and difficult to find in daylight. When the sun sets and the night falls on the pristine grasslands of Kualoa Ranch, Cutia shines a flashlight on the shoreline, searching for the reflective shine in the bullfrog’s eyes. Then she knows they are near.

“When the frog is caught, I gently put them to sleep,” said Cutia. “I sing them a song as they pass away. I bring the frog to my lab and study its DNA, the length of its legs, jaw, and total body size. This research will provide clearer answers as to where they came from, what they eat, and hopefully posit answers on how we can help save the native insect and bird species the bullfrog preys upon in the wild.”